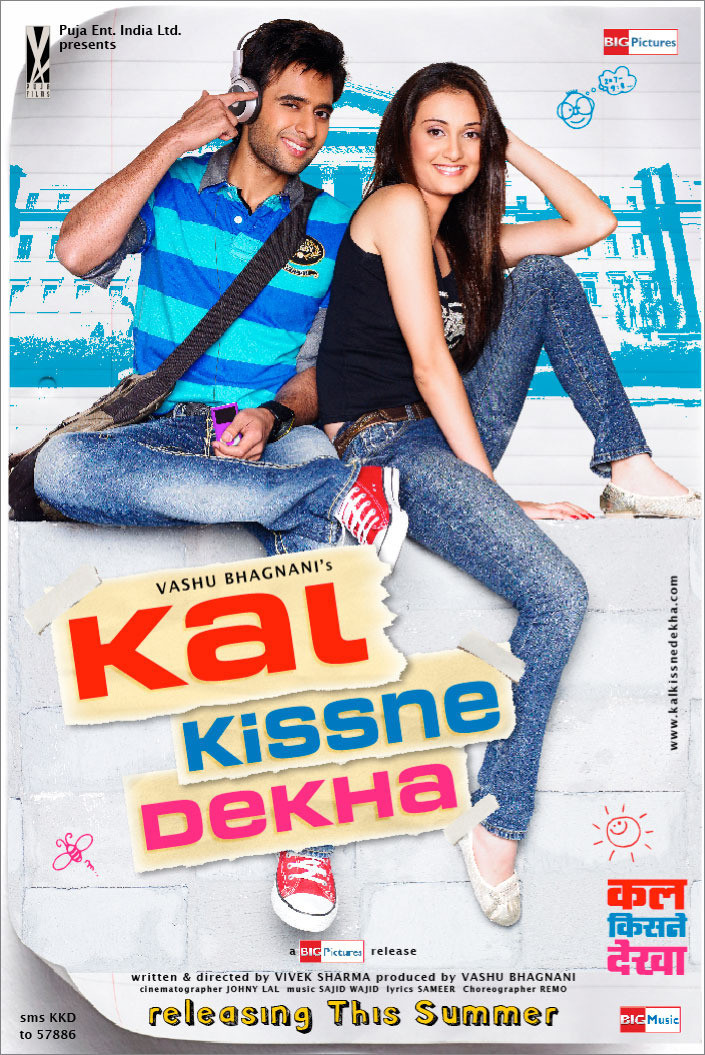 The movie starts off from a village in Punjab with all the characters speaking dialogues, in a deliberate mix of Punjabi & Hindi. This very scene brings down all the excitement level as using Punjab and its background in movies has now reached a saturation point. We have already seen the same kind of sequences and dialogues between a Punjabi mother and his son several times before. So it's time, Bollywood directors start thinking beyond Punjab.

From Punjab, the story moves on to Mumbai where, Nihaal (Jackie) joins his College and also gets to meet his lady love, Meesha (Vaishali Desai). Here we again are served with repetitive scenes of riffs between seniors and freshers, small fights between the lead couple, and then love emerging from both sides, as a requisite. As Nihaal and Meessha fall in love, we are also introduced to Rishi Kapoor, a Physics Professor in the College who in reality is the technical brain behind a dangerous Terrorist Group.

However, the main plot of the movie, revealed much later, is the Future Predicting power possessed by Jackie. He is gifted with a vision to predict the future events and thus is able to save many lives. Strangely, this plot of future gazing, which should have been given the main emphasis, is used in a very light and unimpressive manner by the director. You never feel excited knowing that the Hero can predict future. Neither there are any thrilling sequences which make you jump on to the corner of your seat. In fact, you feel sorry for Jackie, who keeps on trying hard to bring the viewer into the movie but gets ditched by the screenplay in a big way.

Particularly, the scene where Jackie discloses his precious gift of a vision in front of his college friends, Police & Media is filmed in a very childish manner. For example, on knowing about his futuristic vision, one of the reporters asks, "How do you see those visions, in black & white or in colour?" Quite funny! The climax sequence of Jackie, predicting the hidden bombs planted in different places is also directed in a very simple style, which fails to generate any curiosity in the viewer.

Director Vivek Sharma, did a good job in "Bhoothnath", where he came out with some good emotional scenes along with a pleasant comedy touch. But in "Kal Kissne Dekha" he seems to be confused between the love theme and thriller plot of the movie. The script tries to incorporate all the famous Bollywood ingredients into it, which in turn completely spoils the final product.

Performance wise, Jackie Bhagnani, definitely shows promise and has surely got the talent to watch out in future. Unluckily, he didn't get ample support from his director and writer in his debut movie, even when it was his own home production. His personality also has a slight resemblance with Uday Chopra, which should be worked upon for his next ventures. Vaishali, as his love interest, acts well with confidence, but looks more like a glamorous model in many sequences. They both look good together on the screen, especially in the song sequences shot brilliantly.

Interestingly there is a long list of reputed artists, wasted in the movie, doing unimportant things at regular intervals. Rishi Kapoor, plays a negative character of an insane scientist and doesn't seem to be natural in that. Ritesh Deshmukh, is there trying to make you laugh but fails to do so in an undefined role. Sanjay Dutt can be seen dancing as a DJ in a song, but you may not spot him, if not watching carefully. Juhi Chawla, gives a surprising cameo as a Stage Anchor in the Shopping Mall, who simply vanishes when a Bomb is reported under the stage.

Rahul Dev as the main terrorist, Satish Shah as Meesha' father, Farida Jalal as Meesha's caretaker & Archana Puran Singh as Jackie's mother, have nothing much to do in their under-written roles. Archna's character of a Punjabi mother, coming to the city for his son, also reminds me of a similar character of Sunny Deol's mother in "Jo Bole So Nihaal". Interestingly Jackie's name "Nihaal" is also the same as Sunny Deol's in the above mentioned flick.

Sajid-Wajid's music in the movie could only reach the average mark with no particular song as a front runner. And as usual the songs are placed at places where they were not required at all. Though, there are some great natural location canned beautifully by the cinematographer, but the locations also keep on jumping from local to foreign ones with no continuity as such.

Summing up, "Kal Kissne Dekha" is a victim of some baffled writing trying to incorporate both a love story and a thriller, into the same project. It has only Jackie Bhagnani sincerely trying his best to do the right things but everyone else doesn't seem to be interested. I saw this movie expecting a stupid wannabe movie about two people who fall in love with a pointless twist of having visions that is not really explored at all. When I saw the movie, I was very positively surprised. Both Jacky and Vaishali acted very well for their first movie and the story was nice as well. The first half of the movie is romantic with some action. The action was not very intense, but it was there. There was some drama and comedy as well. Both of the main characters did an excellent job establishing their character, and who can forget the hilarious and adorable Bebe played by Archana Puransingh? The story was well played out with a little touch of sci fi and lots of action. The second half was very much a thriller and it was definitely well played out. Overall, the movie had the perfect blend of genres and the actors acted very well. I'd love to see them again in new movies. The backdrop of college was youthful and entertaining and the soundtrack was upbeat and melodious at the same time. I would recommend this movie for sure.